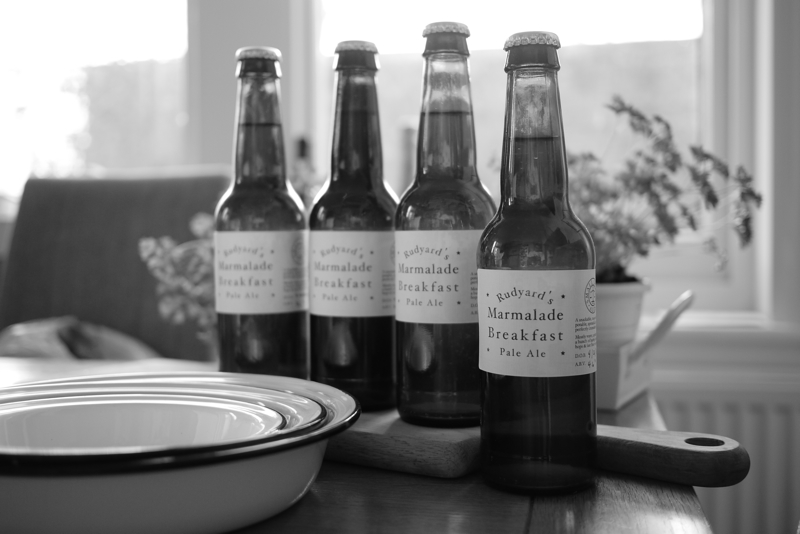 The thing I like about brewing is it's a process of trial and error. There's plenty of received wisdom, but just as many anecdotes of that wisdom being completely wrong. But everyone slowly figures out what works for himself, and gradually improves his beer in the process. My brewing journey has taught me a few samaxims – that is, maxims that hold true for me, but not necessarily everyone else.

Not a lot of samaxims at this stage, but I'm at an early stage in my brewing career (breweer? I love portmanteaux). Everything else is broadly up in the air. But each time I brew, I feel I get closer to finding the best way for me to do things.

And so we come to Rudyard's Marmalade Breakfast Pale Ale. In case you missed it the first time round, Rudyard isn't real – he's a fellow who, if he existed, I like to think would hawk this beer from a soapbox in Spitalfields Market. Rustic, homely, unapologetic... and most importantly, approximate: because that nicely sums up the difference between how I planned this beer, and how it turned out. If there were to be a third samaxim at this stage, it would be that brews never go as planned, so learn to be happy with what you get.

With RMBPA, I was aiming for a light, lively pale ale, of sessionable strength (4%, or a dash either side), furtive bitterness, and a chewy, marmaladey bouqet. Compared to my previous brew, things sailed along smoothly – no technical difficulties with scales, thermometers or boiling vats of hot, sugary liquid. The sheer volume of pellet hop detritus at the bottom of the kettle did unfortunately result in only about 13.5 litres making its way into the fermenter before the hop blocker, well, blocked, which has left me searching for a less blockable blocker to avoid wasting good would-be beer (like the promising athlete cut down in his prime by a gangland shooting – or a more tasteful simile).

What went wrong then? I forgot to add my copper chiller to the wort until the boil had finished. Received wisdom (love that stuff) is that chillers should enjoy the last 10 minutes of the boil being sterilised in the boiling wort to negate any chance of infection. Now chances are I would have been fine dunking the copper coils in the wort once the boil had finished, as the ever so slightly sub-100 C temperatures would probably have achieved the same thing. But received wisdom being what it is (terrifying), I didn't want to run the risk of wasting £20 worth of ingredients (and more importantly, most of a free Saturday) infecting a beer. So I reluctantly chucked in the chiller, turned the boiler back on, and boiled away for another 10 minutes.

The result was predictable: more concentrated wort, and more bitterness. Instead of an original gravity of 1.040, I started with 1.046. Ten days later I reached 1.011, for an ABV of 4.6%. So, luckily, it wasn't fatal to my goal of making a sessionable pale ale. 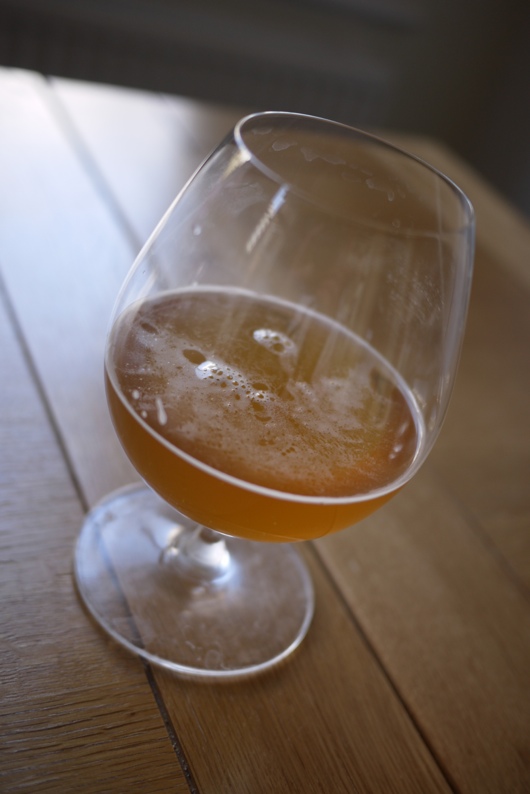 If anything, it might have been a lucky mistake, because I wasn't prepared for quite how tongue witheringly bitter this beer would be. Malt-wise, this is probably probably the simplest beer I've made. The Golden Promise is restrained, with a subtle nutty chewiness which finds its way to the underside of the back of your tongue. This, of course, allows the hops to really take over. The nose is delicate and floral, with a hint of citrus fruit, which was probably the work of the small amount of Citra I added close to end of the boil. The flavour, however, doesn't quite live up. There's something unavoidably solventy (or if I'm being kind, perfumey) about the beer that I can't help ignoring after the first sip – which I also detect in the aroma once I take another sniff. It's small and not fatal – but it makes me wonder about the yeast and whether it was fermenting at too high a temperature. Or I could be wrong – this could just be a characteristic of the NZ Pacifica. Ultimately, it's all just speculation.

One thing I will say about the yeast – it flocculates extremely well. This is probably the clearest beer I've made to date, and I wouldn't hesitate to use Wyeast 1272 again. Aside from the slight solventiness, this is also probably the cleanest, most "commercial-craft" beer I've made (viz. Rocco's Modern Weiss and its quickly collapsing head), and I can't even say for sure that the solventiness is a fault because I don't know what caused it.

Until I do, here's to the slow, gradual crawl of progress.