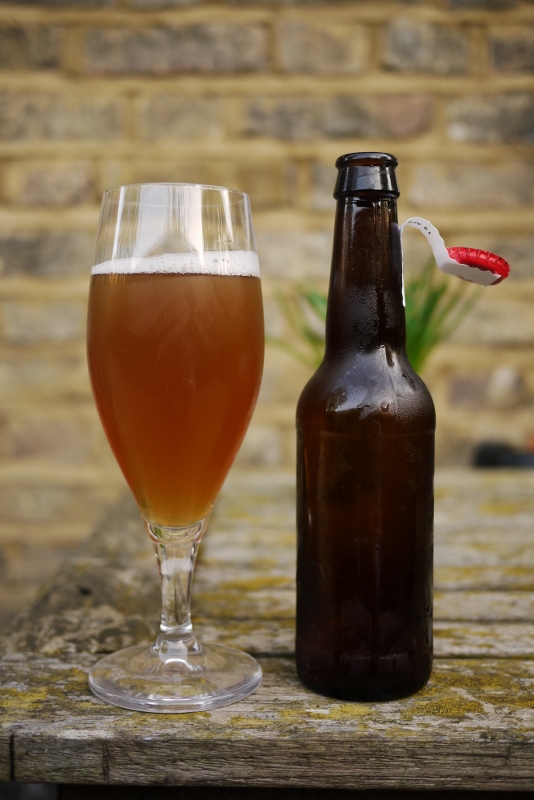 Citra is cheating. That much I know.

This is, happily, the best beer I have made to date, and it's also the first I've made where appreciative friends and family have remarked that they prefer it not just to generally available commercial beers (a line I think I crossed a while back), but also to other "craft" beers they have tried recently. And them's fighting words.

I've been drinking this beer for a couple of weeks since it was bottled and the flavour has gradually mellowed from the tongue withering bitterness I've come to associate with Citra, to a more sensible, rounded and mature bitterness. I actually prefer the tongue withering. It's aggressive, unapologetic and fresh, and underlines better than anything the importance of drinking hoppy beer while it's fresh. While it's still a good beer after a month in the bottle, you feel more like a customer or consumer rather than a part of the brewing process where the beer is still alive and changing even as you take the next sip.

This, I think, is less obvious in other IPAs I've brewed, where the sweet spot is probably the 1 month mark. I'm inclined to put this down to the simple malt bill (100% Golden Promise), which needs little time to develop and mature, unlike the more complex Munich I've been in the habit of using. And I do feel that the malt bill was real vindication of my hunch that less is more when it comes to hoppy beers. "Malt backbone" is a term you'll hear deployed on an internet forum when someone broaches the notion of brewing a hoppy beer (received wisdom at play agin), but at best I think it's a distraction. The pure pale malt is slightly bready, a touch nutty, and provides a wonderfully creamy mouthfeel and perfectly retentive head. My only slight quibble is that it turned out a little darker than expected, but that's hardly a legitimate criticism.

I do however have mixed givings about using Wyeast London Ale III again. The level of sedimentation, both within the fermenter and the bottle, was higher than anything I've seen before. This beer demands careful pouring more than anything I've ever made or ever drank. While it's not a real problem for beer nerds, I don't like having to give beer away with an instruction manual, so I may yet still be searching for my go-to ale yeast.