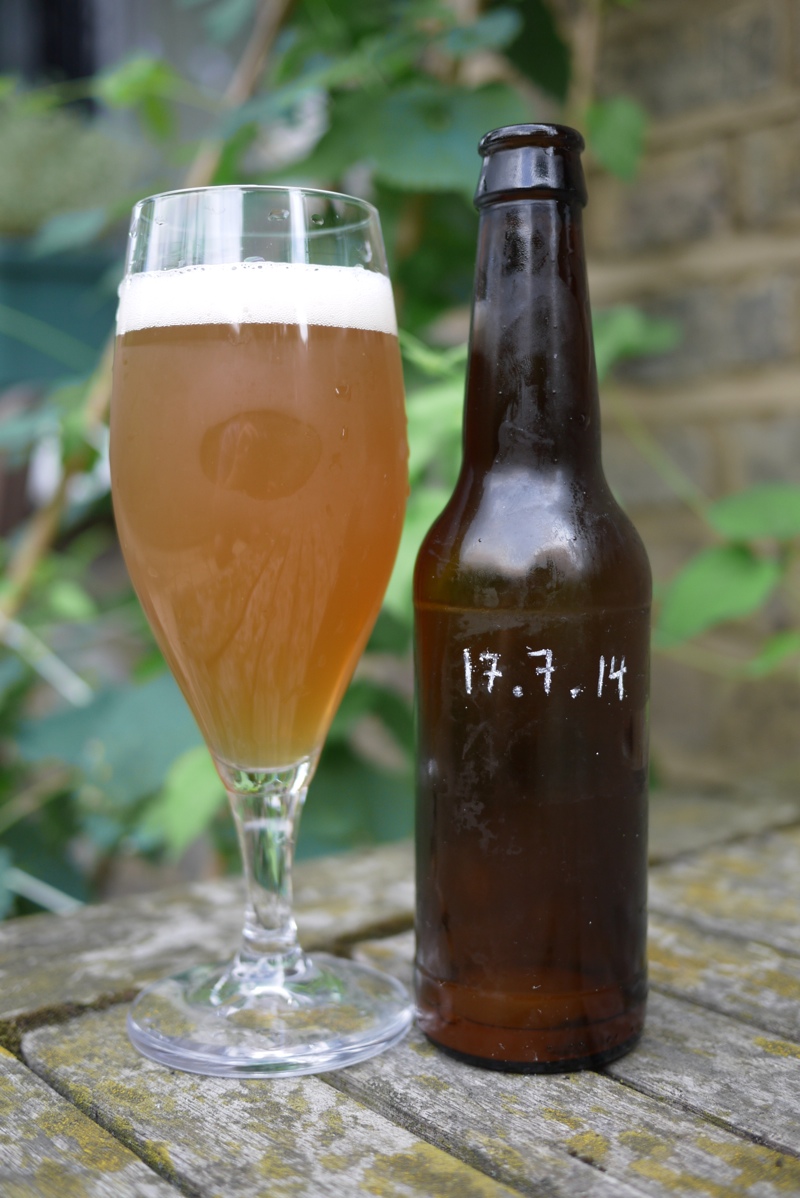 When I started brewing about 18 months ago, I wanted to match the incredible IPAs being brewed by some of the (then) up-and-coming London microbreweries like the Kernel and Brew By Numbers. Fresh, juicy and aggressive – at the time I thought they were much more exciting than even the American IPAs they were imitating. I've since begun to suspect that the bottled American beers we get here in London probably haven't had the best life, and probably aren't all that fresh. Sure, I could order bread from a leading California bakery, but it'd be stale by the time it got here. Much the same with a hoppy beverage.

At three weeks old, this is about as young as you'd want to drink a 7.6% beer. In some ways it's sad – this beer has just reached its pinnacle, found its shark to jump. The hops are at the their hoppiest, and the uncomplicated pale malt background isn't likely to get more interesting over time – it's certainly not going to make up for the punchiness of the hops as they gradually fade in complexity and lose their autumnal cheer. With a whopping, prickly, tongue-curling bitterness and a residual sense of fruitness, it is quite literally bittersweet.

But, sipping this beer, I can't feel anything like sadness. This is the reason why I can easily imagine myself never buying another beer outside a bar or pub. It's my platonic IPA, at long (maybe not that long) last. Sharp, juicy, a resinous, piney punch, with a hint of succulent marmalade. I came close to this with Mighty Blighty, but the yeast threatened to undo my good work by making each bottle a damn nuisance to pour. London ESB yeast is much more obliging, sticking gracefully to the bottom of each bottle until it's time to wash them out. Uneconomical hopping rates have left their mark on the clarity of this beer – particularly so since this strain of yeast is supposed to result in a crystal clarity – but I like the story they tell.

If there's a fault, it's – once again – uneven carbonation. The first three bottles have been like a slightly out-of-order Goldilocks experience. The first had too little, the second was just right, and the third exploded all over the living room. You'd think I'd have mastered the simple of art of stirring by now.

But, unpleasant beer explosions aside, this is piney perfection. Squatch will be hiding in my fridge for the next few weeks – but, with a beer this good, probably not much longer. At the risk of displaying some uncouth beer hubris, I think I might have just about conquered my ideal IPA. It may be time to move on.