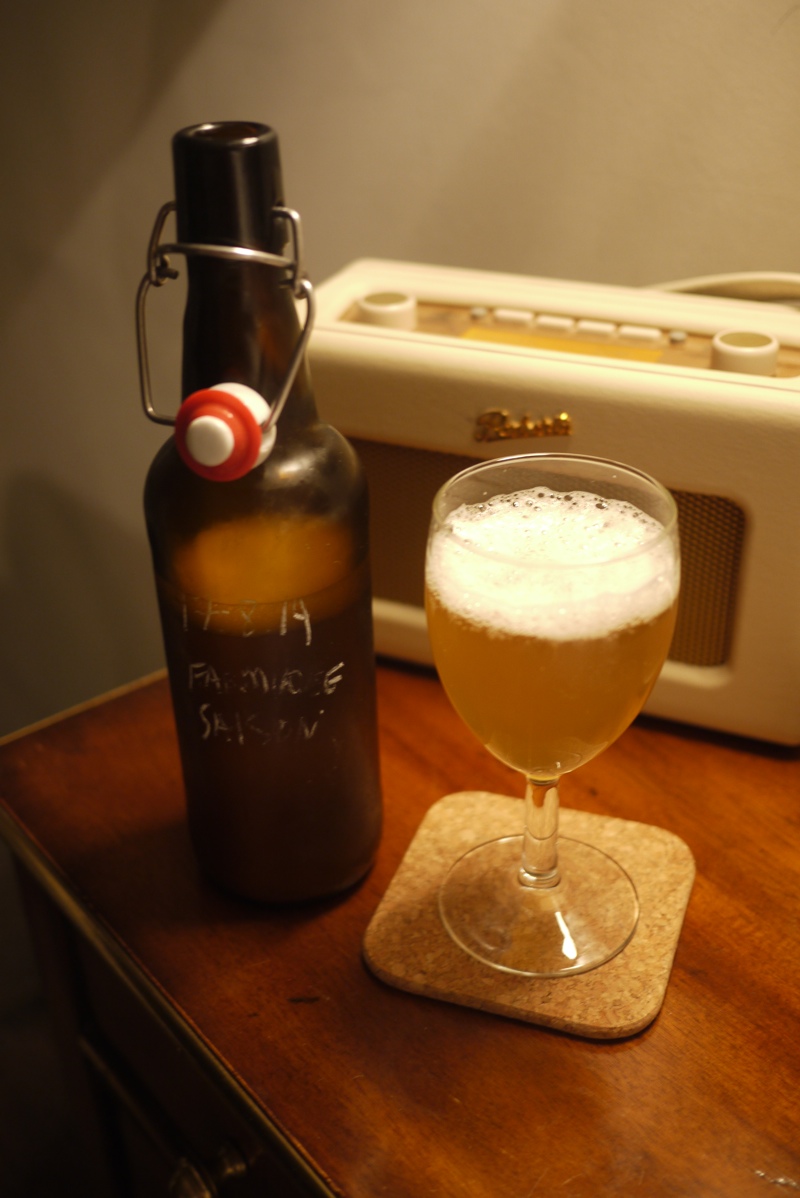 My young saison took a recent trip to the west country for the August bank holiday weekend. In addition to having free, delicious beer in the minibar fridge (although I couldn't really knock this particular hotel's beer selection), I was also able to see whether my eighteenth batch met the demanding speed challenge I'd set for it. Having skipped the one week mark due to being ill (I'm pretty confident it would have been undrinkable at that age anyway), I was determined not to miss the first fortnight.

The aggressive French saison yeast had carbonated nicely in the five days I gave it. It poured with a lively, foamy head which gave off a fresh, bready, yeasty aroma. This might be the palest beer I've made to date, thanks to the (very) pale colour of Pearl malt and the large propotion of wheat I used in the grist. It's a light, straw colour, and looks beautifully refreshing.

This might be a result of its young age, but I got very little by way of hop aroma in the nose. Whether it's hiding behind the yeast, waiting to emerge as the beer settles and ages a little, or just 'gone', I can't say yet. Strangely I have the same comment for the hop flavour too. Considering 48g of Citra went into the wort after flame out, I would have expected juicy, tropical fruit all over the place (the hydrometer sample before fermentation tasted like bitter pineapple juice). Again, I wonder whether it's just buried behind the yeast esters.

Overall I can't complain though, because this beer is all about the yeast. It's tart, slightly sour, but peppery too – all the classic saison hallmarks. Bitterness is detectable but restrained, and the mouthfeel is, while silky and slightly chalky at the same time, also surprisingly full considering the wort started life a hair under 1.040, and attenuated out to little more than hopes and dreams. Maybe it was the IPA followed by negroni followed by half-bottle of Côtes du Rhône accompanying a large rib-eye I'd started the evening with, but I felt full before I could get through much more than half. Perhaps worth trying on an emptier stomach before I make any hasty conclusions.

So, for beer (and particularly saison) lovers who don't mind hazy beer and aromas of fresh yeast, 14 days is enough time to get a beer brewed and on the table. But what about something more mainstream? And is a fruity saison a suitable gateway beer for the (entirely female) cider lovers in my family? Those, friends, are questions for another time.