In early September, I was scrabbling around for a beer recipe that would make something light, refreshing and quaffable - perfect for an upcoming backyard BBQ - and quickly. I dubbed the recipe I came up with "Clipper Pale Ale", in homage to the terrifically quick 19th Century sailing ships that sped around the globe with three masts, lots of sails, and gallons worth of hoppy IPA lashed down in the hold. For a speedy beer, there couldn't be a more appropriate name. Partly because I liked the symmetry, but also because I'd read they produced orangey, citrusy characteristics, I also decided to use a new variety of hops (well, new for me) called "Admiral". With a name like that, how could I look elsewhere? 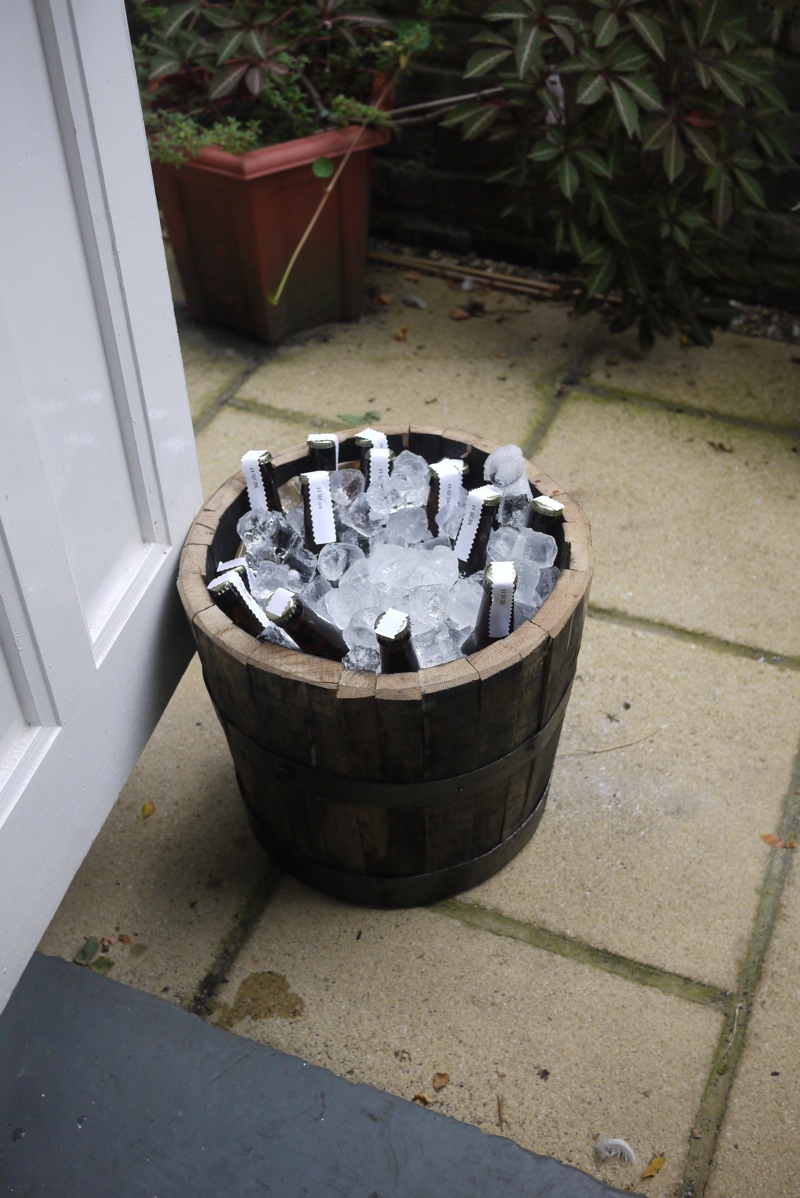 To get a beer to the table in time for my BBQ, I needed a relatively low gravity – somewhere between 1.040 and 1.045. Pearl has become my go-to pale malt, so that took the lion's share of the malt bill. Bringing up the rear was about 11% worth of light crystal malt. I wanted my beer to be more palatable to the non-hop heads attending the BBQ, and the unfermentable sugars added by crystal malt add body and maltiness, counteracting bitterness. To my mind, crystal malt should also help a beer to reach its final gravity more quickly as there's simply less that's fermentable in the wort.

I also decided to revisit Wyeast 1968 London ESB. It's a straight up fruity English ale yeast that (in my experience with Squatch) ferments rapidly and (not in my experience) flocculates and clears up beautifully. It does, however, leave a slight mineral chalkiness in the mouth feel that should be right at home in a beer that's as close to a "boring pint of brown" as I've ever brewed.

To speed things up even further, I decided to make a particularly small batch – just 10 L into bottles. Why? Smaller volumes heat up and cool down more quickly, speeding up the brew day. And, not having got into the habit yet of making yeast starters, a single packet of Wyeast should tear through 10 L of wort more quickly than the typical 15 L. It also means that I can bottle from my 10 L fermenter, which has a smaller diameter, leading to less beer being wasted. Bonus beer.

The brewing went smoothly. With a smaller volume of water, I did just a single sparge. The boil lasted for 70 minutes, but I still managed to undershoot my target gravity by an embarrassing 5 points. I think I might have to reeaxmine those volume markings on my 5L jug. Fermentation began quickly (there was evidence of krausen by the following morning), and the gravity had dropped to 1.010 by day 3. I thought at first that it was still fermenting up to day 5 (which would have been surprising), but the internet tells me that it might simply have been carbon dioxide escaping from solution. Thanks, internet. I bottled with moderate carbonation, like an English cask ale, at 4g of dextrose per litre.

The beer was good to go for the BBQ after just B-Day (that's "Brew Day", not "Birthday") +12. It was, however, a pretty bland experience. It pours with a lovely, fluffy white head, and has an attractive, clear, copper colour. Unfortuantely, there's pretty much nothing going on in the glass. Although Admiral is described as having a light, floral, citrusy aroma, I think it's probably best described as a clean, high alpha bittering hop, and that's about it. Other than adding colour, the crystal malt did very little for me either. I'm wondering whether it might have been stale, because aside from the subdued nutty character, the mouthfeel was thin and I'd struggle even to describe the beer as "malty".

Overall, an inoffensive experience not to be repeated.