Being as only 50% of the people living under my roof enjoy beer, I thought that it would be charitable of me to whip up a batch of red wine that we could both enjoy some months hence. My go-to red is a fruity, ripe New World Malbec. The pretentious side of me is somewhat concerned that Malbec is the wine equivalent to IPA – a punch to the palate, rather than something sophisticated kids in the know drink. Even if that is the case, though, my wine palate is obviously lagging a way behind my beer palate, and in the mean time I'm going to try to make something I like. 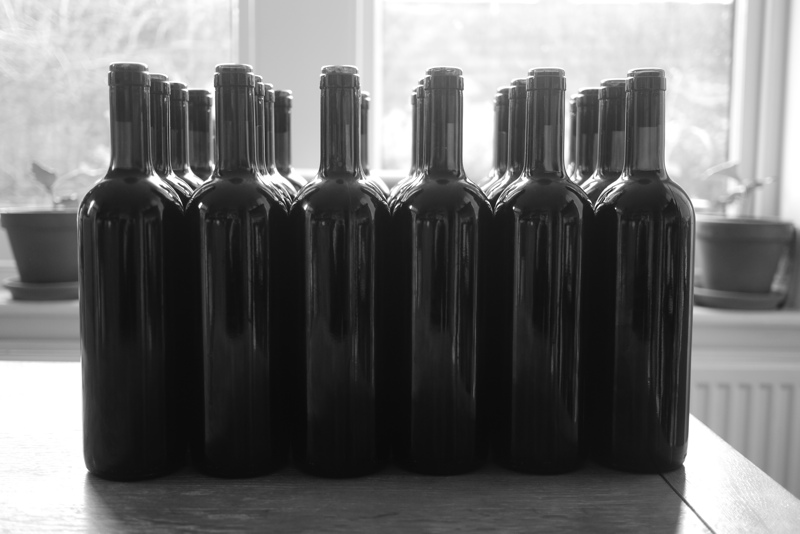 Homemade wine, like homemade beer, has a bad reputation, probably deservedly. I set myself a low bar with this wine: it has to taste at least as good as a bottle of equivalent price from a wine merchant: whether that's Oddbins, Amathus, Laithwaite's, Berry Bros or maybe just Waitrose. At first I thought that would be easy. I'm already capable of making decent beer, and have all of the equipment – how different can wine be?

After a little market research, I snagged the Selection International Chilean Malbec kit back in September for the swallow-inducing price of £72.05. But: a 5 gallon kit that produces 30 bottles? That meant that each bottle would only have to be as good as a £2.40 bottle of red from the supermarket (notice I'm no longer saying "wine merchant"). I don't even think you can buy wine that cheap in Central London. If you can, next to the words "red wine" on the label, it probably reads something like "cooking", "Ukrainian" or "used to be". The outlook was positive as I manuevered the extremely heavy but structurally questionable box of grape juice over the brim of the fermenter and breathed a sigh of relief as it all went in.

But, I found out, making wine is (probably) like having children: the add-ons – oh, the add-ons! Wine, it turns out, needs to live in something called a carboy after the first fermentation. The large, airy gap you get between the top of the wine and the lid of a normal bucket fermenter can, apparently, cause oxidation due to the amount of time the wine needs to sit there (presumably reflecting on how delicious it will soon taste). I didn't have a carboy, so I had to order one from Amazon. As it's also tall and has a very narrow hole (who invented these things?), I needed a way to get it in there, so I also bought an auto-syphon. That was £27.80 for the carboy, and £18.33 for the syphon. As steep as those extras seemed, that's still only £3.93 per bottle. While I suspect you probably can buy wine in Central London for that price, it probably lives on the bottom shelf, is almost certainly white and is without question in a blue bottle with a picture of a nun on the side.

Until, you realise, you're not going to get 30 bottles out of your beguilingly inexpensive kit. Wine produces lees, the equivalent of trub in beer, or "undrinkable grossness made by yeast" in plain English. In order to avoid hosing up that gunk when transferring from one vessel to the next, you have to give it a margin of appreciation and leave some of your precious wine children behind. I ended up with 26 bottles, rather than 30, so that's now a whopping £4.54 per bottle. Yikes. We've moved up a shelf. I'm thinking screw tops. I'm thinking brightly coloured glossy labels. I'm thinking pictures of kangaroos. I'm thinking, it doesn't seem all that long ago since I was taking this stuff to people's houses with a straight face.

It was at this point that I encountered another interesting difference between beer and wine. Beer is, if not fizzy, at least no foe of carbon dioxide. Not so of wine. A bit of carbonic bite in a dry white might not be so unpleasant, but red's a different story. I was the lucky recipient of a bottle of fizzy mulled wine a number of years ago after winning a Christmas pub quiz, and it was an ungodly creation. It turns out however that unless you're prepared to wait for about 6 months, carbon dioxide will be hanging out in solution unless you forcibly remove it. To do so, I had to buy something called a wine whip – basically a long paddle that attaches to a power drill and whips the CO2 out of the wine. I bought two wine whips, actually: £8.99 for the first one, and £19.80 for the second, much better one (if you're in the market, don't get a plastic one. Plastic and power drills do not go together well). So that's £5.65 per bottle – the type of price that starts to command some embossing on the label.

And finally, you need bottles. I did some market research to find something both attractive and reasonably priced, but whatever you find, £1/bottle seems the going rate, so I settled on a box of 24 olive coloured bottles for £23.50 on eBay. I also used a couple of empty swing-tops to mop up the remaining volume. With that final expenditure, the bar was raised for the value challenge to £6.55 per bottle. That's not unfeasibly high – it's still really only scraping the bottom of the Oddbin's barrel – but it's also not a no-brainer. It would have been even more expensive had I not already owned a few other miscellaneous bits of equipment (fermenter, corks, corker). With the capital expenditures already having been sunk, the second batch would be considerably cheaper – back to somewhere between about £2.40 and about £3.68 per bottle. But I have to get through 26 bottles of unknown worth before I can contemplate spending to save that much.

Check back in a few months for the showdown.