August is a good month for brewing saisons. The temperature means that unless you are lucky enough to have a special fridge to keep a handle on your fermentation temperatures, little else can handle the heat but saison yeast (not without spitting out unwanted byproducts anyway). This time last year I made one of my favourite beers yet – a quick and dirty French saison. A middle-aged West country landowner actually called it "funny and foreign", and I couldn't have been happier. It was refreshing, light and a perfect summer beer.

This year, in celebration of my move to Peckham, I wanted to try another French saison, but with a few changes. Rye was substituted for wheat (a Peckham Rye - geddit?), and I decided to forego the BIAB calculator completely and take a punt on the masses of grain and volumes of water and see what came out the other end. 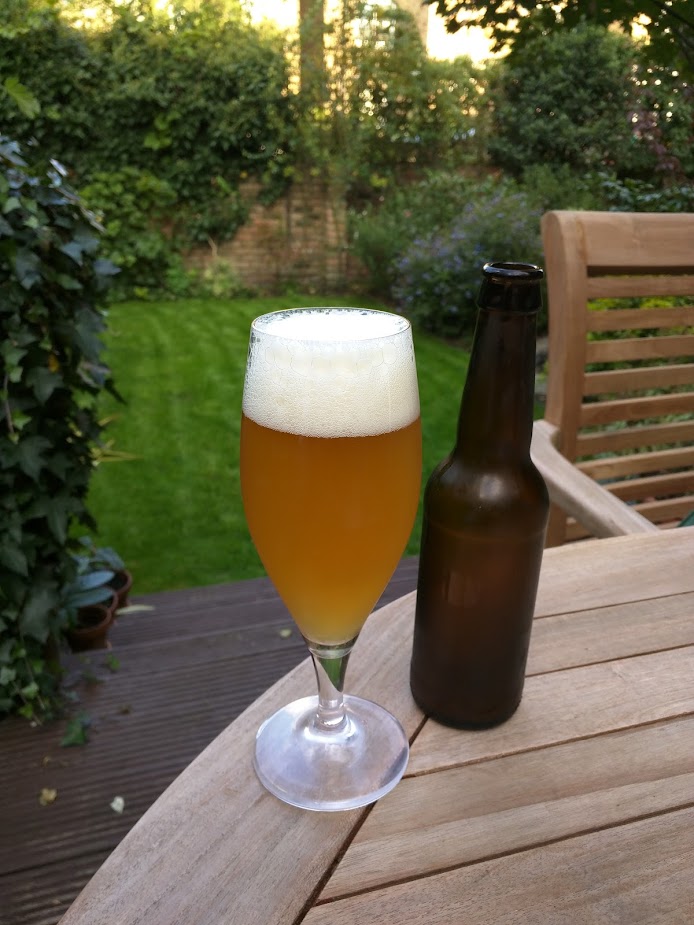 What came out the other end was quite a lot stronger than what I'd expected. I somehow expected the fact that I'd dumped a whole 5 litres of refrigerated water into the kettle after the boil would be enough to counteract the absurd amount (for my kettle, anyway) of grain. Maybe it'll have to be 10 litres next time. Holding back some water in the fridge was intended to bring the kettle temperature down to pitching much more quickly. It mainly worked (knocking about 30 C off in seconds), but it was so damn hot the day I brewed that it took about an hour with the the copper chiller to bring it down another 30 C. As I said, maybe 10 litres next time.

The wort then went into a carboy and spent just over a week at room temperature fermenting out. I then transferred the carboy to my new wine fridge (thanks Argos!), brought the temperature down to 7 C, and let it settle for two weeks before bottling. I primed with about 4.5g/L of brewing sugar and waited about three weeks before cracking one.

The beer is similar to last year's: hazy, slightly peppery, and somewhat juicy. It's drier though, and less like a mouthful of refreshing pineapple. I chalk that up to it being a lot stronger, and probably the rye as well. This beer's obviously still in its infancy, so one bottle is hardly the final word, but so far I think I prefer last year's effort. The hops were, by now, harvested two years ago, so that could be a large part of it too. All in all, not a terrible inaugural beer for a new home, and a good end of season BBQ beer.