Nano-brewing the Estate Pale Ale was a lesson in adding a little bit of shine to a brew. Cold-crashing for 48 hours in the fridge brought a near instant clarity to the beer, and left more sediment in the DJ and therefore less in the glass (woo!). Trouble is, I live in London and don't have the luxury of a brewfridge, keg-a-fridge, fridgerbrew, or a kegerator. I have – generally speaking – sock weather outdoors, or enough room for a single demijohn in the fridge.

Relegating an entire brew to the company of fornicating foxes (I'm serious, it's awful) is something I'm a little hesitant to do. Stashing a demijohn in the fridge only requires moving a shelf for a night, and is something I can just about get away with. For my standard 15 litre brews, that means I need to split each batch into three.

That might sound like a pain – but it also sounds like the perfect opportunity to experiment (woo!). Splitting a batch means the chance to throw a few different ideas at the same beer without changing any other variables. 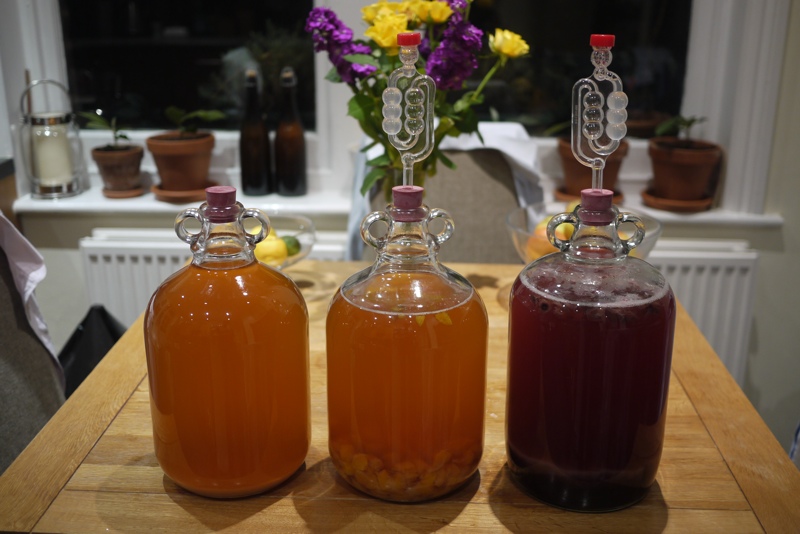 For the base beer, the control sample, I wanted something that would stand on its own feet but which would complement whatever extra oddments I threw at it – and it was always likely to be fruit. The Belgians, I figured, love tossing fruit in their beer, and ever since my first less than impressive two attempts at Belgian beers, I've been hankering to try again and do better.

The key to Belgian beer recipes is – I'm told – to keep it simple, with neutral malt and hops and yeast that does all the heavy lifting. I knew this last time I dipped in my mash paddle, but I still managed to overcomplicate both batches with speciality malts, adjuncts and math, and produce a muddy mess. Perhaps it was the knowledge that I'd be fruiting up two-thirds of the batch and tinkering to my heart's content, but this time I actually managed to rein in the tendency to complexicate.

The simplest style of Belgian is a golden ale, also known as a Belgian pale, also known as a Belgian single (unless you are particularly into beer taxonomy and the BJCP guidelines, in which case maybe they're different – but I honestly couldn't care). Pilsner malt makes up the bulk of this beer. Neutral flavour, pale in colour, crisp mouthfeel. It's at this point that I admit that I couldn't totally resist tinkering with the base beer. I added 25% Vienna malt, which I'd read added a bit of body and sweetness without creating the meaty sense of maltiness that you get from Munich malt (mayhaps). Authentic? Possibly not. What were authentic were the hops – Hallertau Hersbrucker, a staple European noble hop very low in alpha acids. For the yeast I wanted to take Wyeast 1762 Belgian Abbey II for a spin (described as being relatively clean and producing a rich malt character), but my go-to internet yeast flogger was out of stock. So instead I went for Wyeast 3522 Belgian Ardennes ("a beautiful balance of delicate fruit esters and subtle spicy notes" – which sounded nice).

The brew day was uneventful, but one downside to using authentic hops was that they absorbed a much higher volume of wort than they would have done had I used a small quantity of higher alpha hops. The fermentation had begun by the following morning, and dropped from 1.058 to 1.008 by day 5, for an ABV of 6.5% – about half a notch higher than planned.

On day 8, I split the beer into three demijohns. The first went into the fridge for 24 hours, and the other two received, respectively, two punnets (640g) of very out of season lightly roasted apricots (thanks, South Africa!) and two punnets (600g) of slightly out of season blueberries simmered and ensauced in a little water. I cracked a bottle of the control about 10 days after bottling and it was undercarbonated and sweet, so I think this might be another Belgian yeast that takes a few months to get to work. Yawn. Check back next year for a side-by-side comparison.